1.  Time management is super important at a conference like BlogPaws.  Ice cream socials, networking with brands, keynote speakers, one-on-one meetings, Yappy Hours, meals, workshops, Pawject Runway, awards ceremonies, and TONS of socializing and networking - that is just a portion of the BlogPaws experience.  The conference was 3 days long, and I still found myself missing out on things I wanted to learn about and people I wanted to connect with. 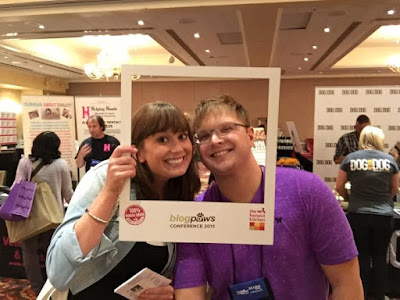 We did manage to connect with The Honest Kitchen, who we love!

I made it to most of the things I wanted to attend:  the Nose-to-Nose Awards Ceremony, the Rescue & Shelter Workshop, and the Photography with your Smart Phone session.  But I missed out on tons of stuff, mostly because I have poor time management skills.  (The irony of there being a session about time management and organization...which I slept through...does not escape me.)  Part of our problem was also that we were trying to squeeze in some sightseeing and shopping in addition to the conference.  If you aren't great at keeping to a schedule, BlogPaws might be a bit tougher for you.  It's a lot, and it can be overwhelming - though I hear it gets much easier once you're no longer a newbie. :) 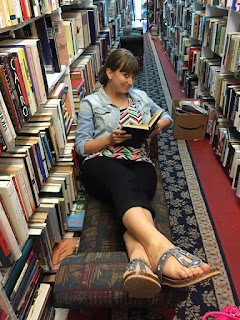 It was due to this BOOKSTORE OF MY DREAMS (called BookMan BookWoman) that we didn't make it to the Pawject Runway. :(  But I'm gonna be honest...it may have been worth it.  I could have lived there.

2.  Positivity is key when it comes to blogging about animal rescue.  The Rescue & Shelter Workshop, featuring speaker Caroline Golon, was incredibly inspiring.  Caroline has raised more than $80,000 for animals in need, just from making good use of her blogs and social media - how amazing is that?!  What she focused on most was the importance of making posts that could be depressing into happy ones.  For example, instead of saying, "Buddy needs a home right away!!!", post something like, "Watch adorable Buddy dance for treats!" and include cute photos or videos.  If people suspect something might make them feel sad or upset, chances are, they'll scroll right past your post.  But let's face it - nobody can pass up a cat video. 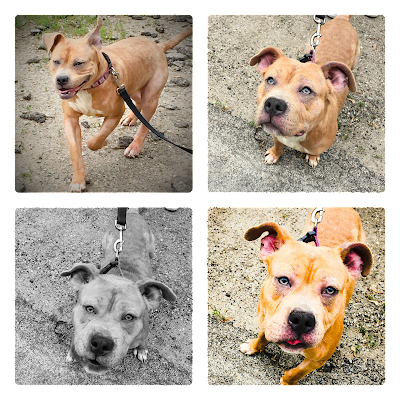 Silly outdoor photos like these are easier to look at than depressing photos of animals behind bars.  (P.S:  This is Taco, one of the cutest "Pocket Pitties" I've ever seen!  He's available for adoption at the HSNI!)

3.  The PhotoShop Express app (free for iPhone and Android!) can turn a good photo into a great one.  Let me start off by saying that Alana Grelyak, the presenter at the Photography with your Smart Phone session, is an awesome speaker.  This session could have easily been boring, but she made it super fun and even used some attendees' photos as examples.  I did not even realize that a free PhotoShop app existed for my Android, but it does...and it's basically life-changing. 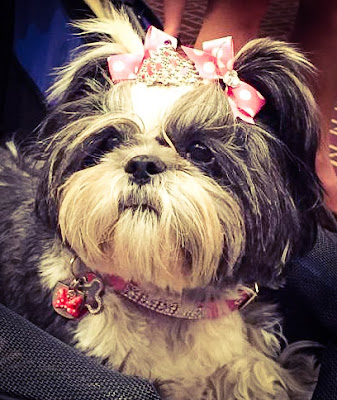 I used my Android to take this photo of Oh My ShihTzu's Riley, then used Photoshop Express to make it even better!

4.  BlogPaws is a great place for not only meeting friends, potential brands to work with, and adorable animals...but also finding new blogs to follow!  When I was planning for the conference, I anticipated meeting lovely people, cuddling with pets I had only ever met through a screen, and maybe finding a few brands to work with on the blog.  (And of course, all of this happened!  I seriously don't know if you could find a nicer group of people - even my husband kept commenting on the kindness of everyone we met!)  What I didn't necessarily think about was how much new reading material I would get!  I love finding new blogs with interesting, fresh content, and I found tons in Nashville.  My list of daily reads gets longer by the day.  Some standouts:  Amanda and Wynston's Dog Mom Days, Rachael and Kevin's My Dog Likes, and the very sweet Tiffany's Diamond Dogs were all added to my list during the conference. 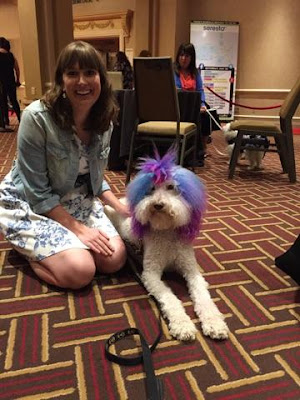 We also got to meet Chilly - isn't he handsome?

I had also not been aware of Alana Grelyak's YouTube channel and blog "Cat in the Fridge" before attending her photography session.  I thought I'd check it out because she said she focused mostly on special-needs kitties.  The blog is, of course, fantastic and has such a neat design.  Before I clicked over to her YouTube channel, silly me had the thought, "Well, once you've seen one cat video, you've seen them all, right?"  Wrong!  Her videos are absolutely amazing and HILARIOUS!  If you haven't watched before, I suggest you do it immediately!  Definitely worth the click!

5.  Pet bloggers can change the world.  I say this without exaggeration.  I was blown away by all the good that the conference did for animals in need.  There were booths set up specifically to showcase adoptable animals.  Still other booths donated food to a rescue with each purchase or donated all proceeds to a shelter.  Each Nose-to-Nose Award winner received $500 to the organization of their choice.  During a lunch, 2,000 pounds of food was donated to a local shelter. In all, more than $18,000 cash and over 27,000 pounds of food was donated to animal shelters.  I mean...these aren't small numbers, people!  I find this so inspiring, and I feel pretty special to be a part of it all. 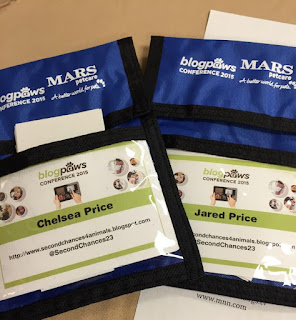 BONUS:  What did my husband learn?  Jared came into this fully expecting to be bored.  He thought it would be "all about me" and he wouldn't be interested in the sessions.  He admits today that he could not have been more wrong.  Jared was just as inspired by the sessions as I was, and he especially loved some of the creative ideas tossed around during the Rescue Workshop - he is now determined to start drawing cartoons/comics in order to promote adoptable animals!  He also kissed more dogs on the lips than I did...but I kissed a ferret and he refused :)  PLUS we got two bags full of swag, so one of them was donated to our local shelter!  If you're on the fence about bringing your significant other to BlogPaws next year, definitely bring 'em along - it's a good time for everyone!  We already bought our tickets for 2016!  :)  Phoenix, here we come!  Will you be joining us there?? 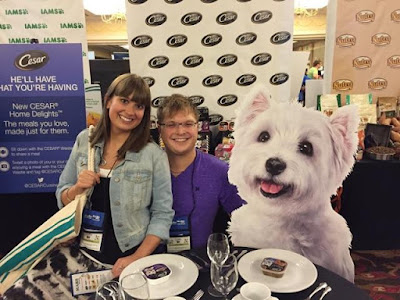 Of course we had to pose with the adorable Cesar pup!

Email ThisBlogThis!Share to TwitterShare to FacebookShare to Pinterest
Labels: Animal Lovers, Blog Hop, BlogPaws 2015, News You Can Use 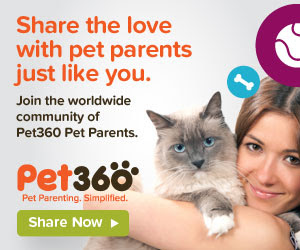