My dog has never run away.  (Knock on wood - we've only had him for a year!)  I like to think that this is because he loves it so much here - I mean, he gets all the treats and belly rubs he could ever want, why would he ever leave?!  But I recently tried to let him outside off leash, and he immediately attempted an escape.  Riley is an older dog who has some...extra meat on his bones, so it was a very slow attempt, but an escape nonetheless!  This little incident scared the hell out of me - I don't know what I would do if I ever actually lost my dog.  I see posts on Facebook of friends whose dogs have run away, and my heart just breaks for them.  What is it about this thing dogs have, this obsession with running away?!  Where do they think they're going?  Do they think the streets have better treats to offer or comfier places to rest?  Anyway.  I recently read a novel that concerned a little dog running away and all of the scary, dangerous, exciting things he experienced during his adventure. 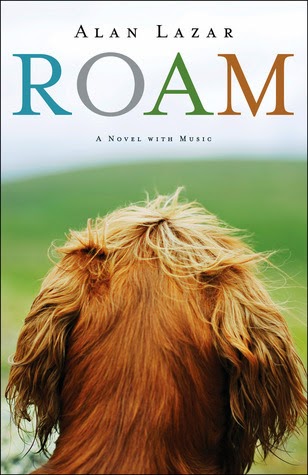 I finished this novel last weekend, and I still can't stop thinking about it.  Told from the perspective of a beagle/poodle mix named Nelson, Roam follows this dog through eight years of his life.  Nelson starts out in the home of the woman who bred him, and he eventually ends up in a cold and unfamiliar pet store.  Soon, though, he is taken home by Katey, who quickly becomes his Great Love.  An incident allows him to escape, and he does so...and of course, Nelson can't find his way back home to Katey.  Nelson roams city streets and dangerous woods, somehow surviving year after year.  He runs into friends, foes, and human companions.  Through dog shelters, sickness, and a motorcycle accident, he toughs it out - all to get back to Katey.


This book could easily have been cheesy and sentimental.  And don't get me wrong, it definitely had its fair share of sap.  But it never went overboard.  The writing from the viewpoint of Nelson felt very realistic; I wanted to keep this little trooper of a dog for my very own!  The story is very reliant on smell:  Nelson can smell everything.  I enjoyed this; it made me think about what scents my dog picks up on.  Another thing I enjoyed about this book was that it came with a "soundtrack" - by scanning little barcodes after the chapter with my phone, I could hear short pieces of piano music that went along with the story.  These pretty pieces were composed by the author himself!

I had a couple of issues with the book.  First, it felt almost too realistic at times - it made me feel uncomfortable to read about Nelson wanting to mate and things like that.  In regards to that, I think the author went a little too far.  I also had a problem with the way the author portrayed pit bulls (vicious, scary, and mean) as well as shelters (cold, damp, dark, awful).  I don't agree with those stereotypes one bit, and I was a little disappointed that the author did.  And finally, yes, the ending came together quite neatly - more neatly than was realistic.  But I would absolutely rather read a happy, convenient ending to a dog book over a sad and depressing one...so I was okay with that.  :)

This novel was very different from most I have read about dogs, most likely because it was all told from the perspective of Nelson.  I really enjoyed the strong voice in this story; I hope you will, too!  (Buy it here for $13.39.)