Hotel for Pets in Mason City!?

My in-laws recently went on a week-long vacation, and they weren't sure what to do with their two shih tzu dogs.  Could they stay with their youngest son?  No; he was away at college in a building that doesn't allow dogs.  Could the pups go to visit my husband's grandparents for the week?  No, that's no good; they have two crazy black lab mixes who terrify the little dogs.  What about a friend?  None that were in town and had no other pets.  So that left us.

My dog, as I'm sure I have mentioned already, is a jerk.  Jared and I are, in his eyes, property rather than owners; we are like two large, mobile toys that it is his job to protect and keep other dogs (and cats, and children...) away from.  We had tested Riley out with the two shih-tzus before, and he was an ugly growling disaster, and the smaller dogs cowered on top of the couch for the entire visit.  So what to do with Riley while we watched my in-laws' dogs?

As with most other things, I depended on my parents.  "Mom?"

"CanyouwatchRileyforaweek," I spat out, like she'd agree if she couldn't make out just exactly what it was she was agreeing to.

A long sigh.  (She is forced to watch Riley fairly often if Jared and I go out of town.)  "I'll ask your dad."

Score!  Dad hates dogs and gets angry when he has to watch mine or my sister's dog, but let's be honest - Dad's not the one that calls the shots.  :)  So that meant yes.

That week was a little bit of a mess.  I love Oscar and Bella (the two shih-tzus), but they were bored in our house.  And boredom led to resentment (probably toward me, since I spent most of that week laying on the couch reading magazines - whoops!) and resentment led to anger-peeing on the carpet...only moments after I had taken them outside.  Riley, on the other hand, was driving my mom a little nuts - following her around the house like a shadow and whining loudly when he wanted to go lay down and she had other things to do.

As Jared knelt on the carpet, sopping up a pee puddle, he looked up at me and shook his head.  "There has to be an easier way of doing this."

And, though I do like friends or relatives to watch the dogs when it's possible (unfamiliarity is usually pretty scary to dogs), it turns out that now there is a different option for pet-owners in our area.  (All photos from the Globe Gazette) 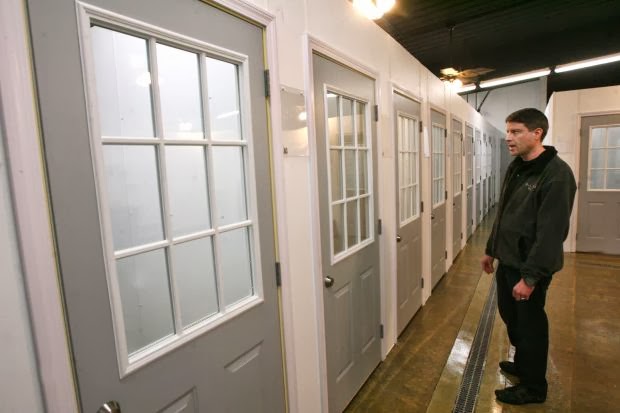 My sister sent me this link this morning:  the Bark Break Hotel has opened its doors in Mason City.  This building, known as a "luxury hotel" for dogs and cats, includes private suites, whirlpool doggie baths, condos for cats, and training classes.  There is even a lobby in the front, to give it that hotel feel.  Three play areas are also found around the building, where dogs can play with the other "guests."  One of the owners of the business (there are two) has been a dog trainer for eight years, and he offers training classes to the guests if their humans want it for them.

There are a couple of things that really make this business stand out from other boarders in the area.  First, there are rooms instead of cages.  It's no fun for a dog (or cat) to be cooped up inside a cage all day, and the Bark Break Hotel basically lets them roam free in their suite and the play areas.  Also, there is a groomer on site to give the pups haircuts/nail trims if needed.  And finally, there are cameras inside each suite and play area, and the Hotel offers an app for owners to check up on their pets and view the live footage from these cameras.  I think that is pretty amazing!  It's like a NannyCam for your pets! 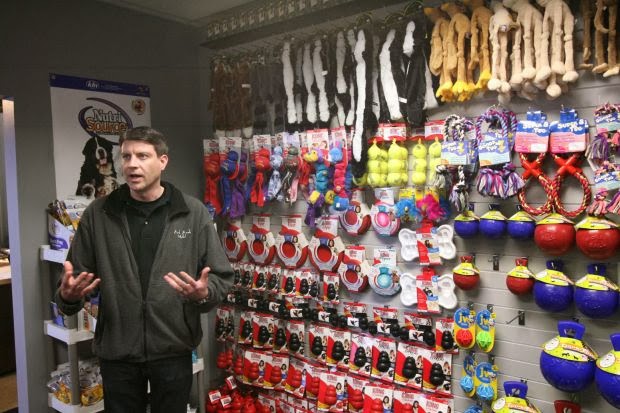 In this photo, one of the owners shows off the small store that is also inside the building selling a variety of pet products.

The cost for a one night stay for dogs is $25, $15 for cats.  You can visit their website for more info, plus their location and hours.

What do you think?  Is this a place you would take your dog or cat if you were going on vacation?  It looks like a great place to me, and I love the camera app feature; my only concern would be how well the dogs are monitored when they're playing together in the play areas.  As I said, my dog can be mean, and I would worry about him around the other dogs.  However, it is reassuring that one of the owners is very experienced in training animals and knows their behavior.  I would always choose family over strangers to care for my dog, but this looks like an excellent second option!

(Also, how swanky is MC getting, right?! :P  They've opened so many businesses recently; it's nuts!  Let's hope a "luxe hotel for pets" gets enough business to stick around!)

Email ThisBlogThis!Share to TwitterShare to FacebookShare to Pinterest
Labels: News You Can Use, Riley